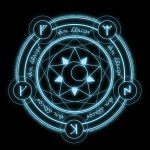 I just gobbled up Charles Stross’s The Labyrinth Index, which is the 9th book in his Laundry Files series. The series is the hybrid that might result if you threw Ian Fleming’s, Robert Heinlein’s, and H.P. Lovecraft’s fiction into a blender. I love it; your mileage may vary.

The underlying premise of the series is that computation and applied mathematics is magic. Not magic in a metaphorical sense; real magic that can unleash demons and eat souls. The Laundry is secret British organization that tries to keep the average computer science student or random hacker from accidentally destroying the universe.

More often than not, they inflict harm only on themselves. But that is small comfort. Consider the example of the Morris Worm that crippled the early Internet because of a programming error that turned an unwise experiment into a catastrophe.

Those who market technology are fond of promising magic. Too many individuals and organizations treat that claim as operational guidance rather than puffery. Stross offers a reminder that we do so at significant risk. The answer lies not in further insulating people from the technology they employ, but in working to reduce the magic factor. We have to get better at making the technology beneath the magic accessible and understandable.