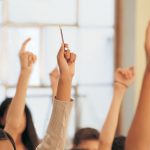 He might have been a bit more diplomatic in his phrasing but that was the essence. Were you going to be driven by safety or by curiosity?

Most of education and society drives our questions to safety. We learn which questions lead to the answers that our teachers and managers are looking for. “Will this be on the test?” is the default question. The ways we suppress curiosity while pretending to encourage it are limitless.

I had a classmate in business school who liked to chat with our professors after class, which earned him a reputation as a brown noser. The notion that you might be genuinely curious about the subject was a foreign concept to most of our classmates. I got to know Phil as the year went on and discovered that he already had a Ph.D. in the History and Philosophy of Science. I may have been the only one in our section that he revealed this to; he believed, rightly I suspect, that this would only brand him further.

Curiosity is a dangerous value; it has killed more than cats. Suppose you also believe it is important regardless of the risks. How do you encourage, promote, and nourish real curiosity in environments that fear and suppress it?

How do you learn to ask questions that matter?

I’m making a claim here that I’ve avoided this problem and navigated the system with my curiosity intact. How did I manage that? More importantly, are there any lessons to learn?

School was a place where most things came pretty easy. But the culture still rewarded right answers and compliant behavior. As I listen to others tell tales of the pressures to achieve they faced from parents and teachers, they strike me as foreign. I was certainly praised when I did well, but I never felt pressured. My mom was always a believer. She was pleased with my results. But, she never talked about expectations. I imagine that with my six younger siblings to wrangle she was mostly relieved that I was operating on my own.

Looking back, my dad was pretty tricky. It was never “were you the best?” The question was “does this represent your best work?” If the answer was yes, the actual grade was immaterial; if the answer was no, then an A was no defense. That got me through high school and by the time I reached college I was comfortable chasing my interests instead of grades. I took courses based on my interests at the time, not based on my grade point average. As I often tell my students today, I managed to collect at least one of every possible grade.

Grades served as feedback, not measures of my value.

My work in the theater taught a second important lesson. Working on stage productions was always about scarce resources and hard deadlines. You can generally negotiate an extension on a class assignment; you can’t move opening night. On a show, the question is always “does this make what the audience sees better?” That leads to a second question, “if the audience can’t see it, why are you doing it?” There’s no good reason to paint the back side of a set.

The question is not about effort; it’s about value. We track effort because we can’t always wait to measure value; effort can be an appropriate early warning signal. Demanding maximum effort is a lazy manager’s way to avoid thinking about the value you are seeking to create.

The old adage is “if something is worth doing, it’s worth doing well.” I encountered an improved version on the bulletin board of a doctor friend:

If something is worth doing, it’s worth doing well enough for the purpose at hand. It is probably wrong, and certainly foolish, to do it any better.”

Throwing resources at problems is rarely an effective strategy despite the frequency with which it is employed. Acceptable as a strategy if you are resource rich, questionable if the problems and opportunities exceed the resources available. Getting the most leverage out of resources starts with learning how to ask better questions.