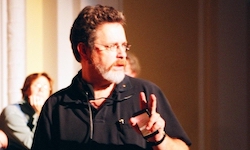 The place where technology, organizations, and people come together has been a continuing focus of my work. That interest was birthed in stories of the wonders and dangers of fantastic new inventions. Like a lot of future scientists and engineers I was raised on the stories of Isaac Asimov, Arthur C . Clarke, and Robert Heinlein.

Somewhere in my early, unsupervised, reading I encountered Arthur C. Clarke’s “Profiles of the Future,” long before I was mature enough to grasp much of it. I’ve since returned to it multiple times over the years. One thing stuck from the earliest, Clarke’s Third Law:

Any sufficiently advanced technology is indistinguishable from magic

That notion gestated in the back of my mind as two strands played out. First, I encountered and learned about technology in multiple manifestations; mathematics, physics, carpentry, programming, electricity.

Second, I created magic in the form of live theater. Group effort focused on creating illusions that touched the heart observed from a spot where all the illusion was exposed. It’s an odd experience to watch a singer bring an audience to tears while listening for the key change that is the cue to dim the lights and adjust their color; all of which reinforces her voice  and triggers those tears night after night.

Where this has taken me is showing people that the magic is understandable. Revealing the technology that creates the magic gives people power to create their own magic and power lets you solve problems.

There is a moral question of whether you hoard or distribute power. I land on the distributing side; the problems we face need all the power we can collectively muster. Hoarding crimps the flow of total power we need.

You transform magic into technology in stages. The first is to shift perspective and take people behind the scenes. That involves telling the story twice; once from the magic side and again from the technology side. Next, you break down the experience into its component parts and reveal the seams. Finally, you help people learn to create and assemble their own designed experiences.

The venue for this transformation can take multiple forms. It can be as simple as a telling of the tale from the right perspective. Or, it can be a guided tour. With enough time and resources, the best choice can be a “build your own” experience with a veteran guide at your side.