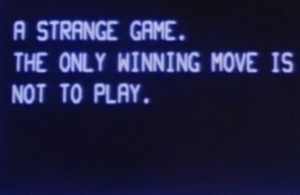 After church yesterday, I had a quick conversation with a relatively new parishioner. I had learned that Ben was from St. Louis, as was I. This was a perfect opening to ask the first question that always gets posed whenever two St. Louisans meet: “Where did you go to school?”

In St. Louis, this is actually a question about what high school you attended. The answer is meant to pigeonhole anyone precisely on a clutch of dimensions – religious, socio-economic, political, cultural. I got the one answer from Ben that I would never have expected. We had both graduated from Priory. We are separated by enough years, that his classmates were the children of my classmates.

The answer was unexpected because Priory is a Catholic, Benedictine, school and we were in an Episcopal Church. First pigeonhole broken.

I’ve been thinking about pigeonholes and sides. And the experiences from my middle school/high school years bounce off that quintessential St. Louis question in odd ways. The question is usually pretty reliable because St. Louis is a pretty reliably stratified environment. If you grew up in the environment, you knew where you fit. By the time you reached Priory at age 11, you knew where you belonged.

I was dropped into this environment as an outlier. We had only just moved to St. Louis and I had no previous connections or pigeonholes that mattered. I lived a fair distance from the school which complicated matters further. My classmates didn’t know where to pigeonhole me either. But I had to be categorized and sorted if I wasn’t to disrupt the natural order of things.

I grasp the fundamentally tribal nature of humans. I’ve spent a good portion of my professional existence dealing with it. But back then I was simply a piece on the board as others were choosing up sides in a game I was only dimly aware of.

I was in an environment where I had strengths that qualified me for multiple roles. I was bright. I was decently athletic. I was quick witted and fast tongued. I was valuable, albeit naively so, to multiple sides. Gradually, I learned to move between sides. What I discovered was how committed people were to fitting smoothly into a primary pigeonhole.

That commitment to fitting in one category often blinds us to the degree of commonality that actually exists between categories. We invent new language to emphasize differences and distinctions. The path to fame in many settings starts with inventing new terms for old ideas. It’s a temptation that is hard to ignore. There’s less reward for revealing shared concepts hiding behind language invented to sharpen differences. There’s deep wisdom hiding in the tagline to the movie WarGames; “the only winning move is not to play.”