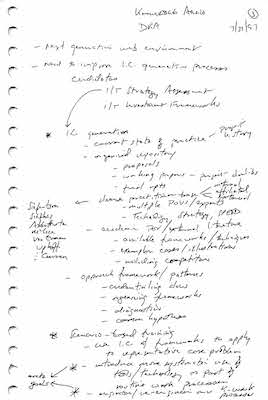 I’ve been thinking a lot about notes lately.

That led me into a stream of research and editorializing about the tradeoffs between taking notes on paper vs. at a keyboard.

The academic research seems to have started with:

Which generated various editorializing in the general press:

Predictably, the consensus appears to be a definite “it depends.”  This debate presumes that there is a correct technology choice independent of any other consideration. As soon as you phrase it that way, the question reveals itself to be nonsensical. You have to have the “it depends” conversation.

The technology choice–pen in hand or fingers poised over keyboard–has to flow from an understanding of goals and objectives  and of  context.

The research speculates that the difference in performance between pen and keyboard is a function of speed. Handwriting is slower than typing and that forces those taking notes to summarize and distill what they are hearing. Those choosing to type are presumed to be striving to create a verbatim transcript. So, the researchers are confusing a technology choice with a strategy choice. What kind of notes you choose to take dominates the choice of recording method. Unless you control for the strategy choice, your research design tells you nothing.

When I was writing cases, I would often be working with a professor and we would both be taking notes. Similarly, in many consulting settings, there would be more than one person conducting an interview. In those situations, we would divide responsibilities with one person primarily managing the interaction and conversation and another primarily capturing notes.

As another contextual example, consider the increasing use of electronic medical records in health care. Doctors I’ve spoken with lament that keyboards reduce the quality of doctor/patient interaction. One response has been the use of medical scribes (Scribes Are Back, Helping Doctors Tackle Electronic Medical Records : Shots – Health News : NPR) to redistribute responsibilities.

All of this simply reinforces that “it depends” is always an appropriate response when considering technology options. Few choices are binary. Even for something as simple as capturing notes.

One thought on “Note Taking–by hand or by keyboard?”