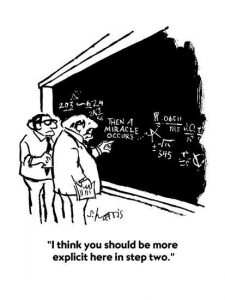 A number of years back my thesis advisor retired and I made the trip to Boston to join in the celebration. One of the observations that has stuck with me was that the curtain was going up on Act 3 of my advisor’s career.

The reason it hit me was that I was being forced into a similar transition but not by choice. The metaphor of the curtain coming up on another act was a lot more empowering than the feeling of the curtain falling to end the performance. That helped me switch from licking my wounds to contemplating what to make of the next act.

Two things have become more clear as this act has unfolded. First, this act has called for me to step from the wings onto the stage. Not all the time, there is still work to be done from the wings, but I have to step into the light. Second, it turns out that there is no script for Act 3; Act 3 will be improv.

Now, the truth is that life is improv, but it can feel safe to pretend that there is a script. If you’ve been pretending there is a script, then making it up as you go feels like you must be cheating somehow.

There was a time when I ran the training function for Diamond Technology Partners, the consulting firm I co-founded with nine other partners and fifteen staff. When we had grown to several hundred professionals a few years later, one of our staff came to me with a proposal. Rik had been an actor before he became a consultant and convinced me that any consultant would be a better consultant with some basic improv training.

We ran the experiment with help from Second City in Chicago—a world class improv company. I joined in the initial sessions myself; much easier to evaluate an experiment from the inside than from the sidelines. It was a success but seen as a bit too threatening to the conventional wisdom by people with the power to say no. I was pushed out shortly after for other reasons and that is a story for another day.

But the improv perspective was a demarcation point in my thinking that only became clear in retrospect.

One of the mistakes that made me uncomfortable taking the stage was believing that you had to have your lines memorized to perform. I had learned one level of truth in the quest for expertise; experts were people with knowledge and answers. You wanted to find the person who wrote the book to get the best answers. If you wrote the book, then you’d better have the answers.

With two books written so far, you would think I would have also learned some deeper truths as well. But, having head and heart out of balance makes certain lessons slow to sink in. Thinking about the differences between scripted performance and improv was one of the elements in getting back to a more balanced place.

Among the fundamental principles of improv are the notions of accepting what is happening in front of you as the only meaningful starting point and of subordinating your personal agenda to letting the collaborative process play out.

What that translates into for my work is that the process is about exploring questions and digging into uncertainties not about starting with predetermined answers. That may seem trite and trivially obvious but honest inquiry is tremendously hard to do inside most organizations. The most powerful demonstration of true expertise is to be comfortable not knowing and trusting that the answers will appear after you’ve worked through the questions.

The essential part of that journey is working through the mess in the middle. There are powerful forces and temptations to rush through that stage. Developing and maintaining the strength to resist is a continuing demand.

One thought on “Dealing with the messy middle; accepting the wisdom of improv”