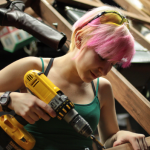 Before my father became an engineer, he worked as a carpenter. When he worked on project around the house, it was a natural step to enlist his eldest as a helper. I was generally comfortable with basic tools by the time I left for college.

That offered an initial edge when I joined the tech crew in college. The interesting thing about tech crew in a university environment was that you couldn’t make any assumptions about prior knowledge. You had plenty of smart people but most equated learning with what went on in classrooms. What happened while you were helping to build or paint a set was work and was a break from class time. There were no teachers, just a handful of fellow students who got there before you did.

What you had was a classic blue collar apprentice environment hiding inside a competitive academic environment. After key safety lessons about working around power tools, you were expected to watch and learn from fellow students. You learned how to do the work by doing the work.

This, of course, was the way that most of humanity routinely learns. But it was out of sync with what most of us had practiced and absorbed as students up to that point.

That small initial edge my dad gave me led to important side effects. I was an apprentice, but an apprentice who could quickly be handed responsibilities to shepherd other apprentices. I was both teacher and student long before I appreciated that teaching was the fastest, and often best, way to learn. I learned how to protect myself from disaster before trying a new technique. Perhaps most fundamentally, I learned that not knowing was a temporary and correctable condition.

This last lesson might be most relevant in the technology saturated world we live in. The flow of new tools and technologies is continual. Learning to use what is new becomes a three step process. Protect yourself from disaster. Run the experiment. Incorporate the successful experiments into your routine. Repeat