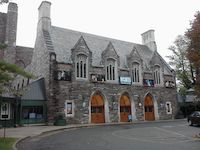 My time learning to be a stage manager contained my first lessons in managing something bigger than myself. If there are 40 people you can see dancing on stage, there were at least as many behind the scenes making it happen. Everyone has a very specific set of tasks to perform, it all has to sync up moment to moment, and it all has to serve a singular artistic vision.

This was during my university years, where I was usually at a rehearsal or work session when I should have been in class. Everyone in the group was a student with three exceptions. We paid for a costume designer, a choreographer, and a director. In my role, I worked with all three, but it was our director, Milt Lyon, who was the sources of the most lasting lessons.

Milt had been working with the Triangle Club for at least twenty years when I arrived. His job was to tease out the core of the artistic vision from the writers and composers and help the performers bring that to life on stage. Mine was to handle all of the mundane issues of time and space: rehearsal schedules, rehearsal rooms, copies of script updates, meeting schedules, agendas.

The details of the incident are lost to me but I had screwed something up that was throwing off the schedule and, therefore, messing up the plans and focus of a hundred other people. I was fumbling through an explanation of how we had gotten into this mess, which included the reasons for why it wasn’t actually my fault, when Milt held up his hand:

Milt was one of the three people on the planet who called me Jimmy.

“I’m not interested. Are we ready to start now? Good, then let’s get going.”

Afterwards, Milt did take a few minutes to talk me through ways to avoid the problem in the future.

Since then, I’ve acquired an expensive and extensive education in how complex organizations work. I’ve had business cards with C-level titles on them and budgets to match. But that moment remains one of the touchstones of my thinking. I’ve come to see it as one of the first moments where I saw what it meant to be a professional.

Are we clear on the goal?

Are we all in agreement about the goal?

Is there something in our way?