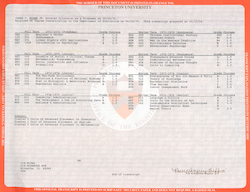 The Fall term is settling into its rhythm. I’ve shared my usual story of my own academic transcripts containing at least one of every possible letter grade. I was a natural, but undisciplined, student. I paid attention to meeting prerequisites for subsequent courses and meeting the requirements of my major but I didn’t think about the practicalities of how what I was learning flowed from one course to the next. More broadly, I gave little thought to the connections between what I was studying now and what I would need to know later for any value of later beyond the final.

My unexamined assumption was that whatever I learned in one class would somehow stick in my brain to be drawn on in the next class or in the future. Notes were what you did to pay attention during class and had no evident value once the exam was done. I suppose textbooks had some value in my mind as I kept those for a while. On the other hand, I don’t think I ever did much to refer back to them in subsequent classes or in the workplace.

Now, it could simply be that I was lazy. There are those who would argue for that hypothesis. Maybe everyone else was more organized and more disciplined than I and I failed to notice their better disciplines. But I suspect not.

I’ve written about the general problems of the shrinking half-life of knowledge. What’s on my mind today is the question of how to cope with that world. We have access to better tools and more processing power than I ever did in my student days. What strategies and practices for leveraging that power are possible that work in both the immediate context of a single class or a single project and contribute to knowledge that’s valuable in the longer term?

There are examples that address this question of continuity beyond the problem at hand:

Doug Engelbart’s seminal work on augmentation ought to bear on this as well. But my sense is that Engelbart doesn’t directly address the question of continuity. Time for another reread—which is itself indicative of the problem.