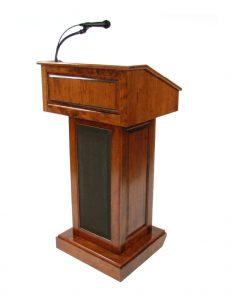 I got involved in theater early on in my high school days. I was quite happy working backstage in various capacities. There was a production that a friend, Kathy, persuaded me to audition for with her. It was terrifying, a disaster softened only by being mercifully brief. Clearly, I was not cut out for the stage; I wasn’t brave enough.

My teachers had another agenda. They expected me to do readings at the lectern during Daily Mass. That led to being voluntold to deliver a brief talk on the first anniversary of Martin Luther King Jr.’s assassination. That led to a Science Fair project that required me to present my work to judges multiple times as I gradually worked my way up through the statewide competition and eventually a trip to NASA’s Marshall Space Flight Center in Huntsville, Alabama.

Through all of this I was absorbing lessons about knowledge work, although I didn’t have that vocabulary at the time. First, public speaking isn’t about courage so much as it’s an exercise in rehearsal, repetition, and practice. Second, curiosity is an excellent driver of energy that can be channeled into sharing what you’re learning. Third, it’s hard to make an impact without sharing.

Knowledge and knowledge work exists to be shared. It won’t share itself. If you want what you learn to make a difference, you have to take the stage.