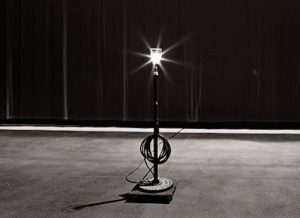 We rolled the last road box up the ramp and onto the truck. We were done. The truck was on its way to Chicago, our next stop. The stage was now bare, empty of the sets, lights, and cast that had filled it a few hours earlier. I had one last task as the Stage Manager before heading off to the cast party now in more than full swing.

My last responsibility was to make sure that the “ghost light” was on. The theater is replete with custom and tradition. You never wish a cast member “good luck,” it’s “break a leg.” It’s “The Scottish Play” never “Macbeth.” And, you never leave a stage dark; there’s always at least one light left on over the stage. They’ll tell you it’s a safety thing; you don’t want someone to walk off the edge of the stage by accident. But, it’s really to keep the ghosts away.

The thing about a bare stage is that it exists between an ending and a beginning. There are old stories to be told and new stories to create. Either is a worthy task; it’s a choice of perspective.

Economist Joseph Schumpeter developed the notion of “creative destruction;” the idea that innovation depended on getting rid of the old to make way for the new. It’s easiest to see in the demolition of old factories to make room for new ones. It’s harder to suss out when we’re talking about shedding obsolete ideas.

This seems to be a relatively unexplored aspect of knowledge work. While we talk about the half-life of knowledge and the speed with which new knowledge proliferates, I can’t think of any advice about how to effectively mark the ending of dead ideas. While we want to learn from history, we also want to avoid being trapped in it. Better to adopt the iconic question from The West Wing, “What’s Next?”