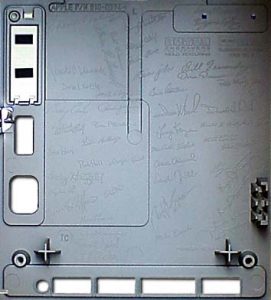 I’ve been writing for more than half a century now. One of the early outlets for my writing was the school paper. Most of that was on assignment and there were no bylines on stories. There was, however, one op-ed piece I wrote that did carry a byline. From my cumulative wisdom of 17 years, I opined that our headmaster should come back into the classroom and teach. Scarcely a rabble rousing call to arms but my schoolmates were convinced that I would soon be summoned to Fr. Timothy’s inner sanctum and suitably chastised. That never happened, although we did have a passing chat on the sidelines of a soccer game weeks later where Fr. Timothy agreed with my analysis but suggested I might lack some necessary perspective.

This was probably the first time that my words and name were publicly linked. I didn’t give it much thought until recently. I thought about deadlines and assignments, but little about formal credit.

As a consultant, I’ve written tens of thousands of words for clients. While my participation and contributions to this work were never a secret, my name is nowhere on the final deliverables. The finished work is tied to the firm and its reputation, not to individual contributors.

Eventually, I began to write things for myself and put them out into the world with my name attached. There’s this blog, case studies, periodic columns, articles, and two books (so far).

I thought this was about getting credit for my work, and that’s an aspect. More importantly, it’s about taking responsibility. Few of us want to attach our names to substandard work. (There’s another story to be told about learning to calibrate your standards to avoid the opposite problem of seeking unattainable perfection).

There’s a missed opportunity here for organizations that depend on quality knowledge work. Steve Jobs understood this when he had the design team for the original Macintosh sign their names on the inside of the plastic case. We talk of knowledge work products as assets to be managed. Each of those assets should also come with a provenance.