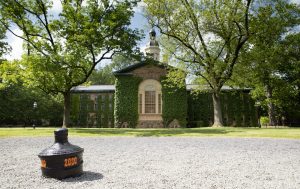 “Where did you prep?”

A simple question posed by another freshman taking in the sight of a thousand other freshmen (3/4s of them men) scattered about Cannon Green on the campus of Princeton University.

Four simple words, yet I wasn’t able to process them.

“Where did I prep?” Prep for what? This get acquainted picnic among a thousand strangers? This college experience I was setting off on?

It dawns on me that the question was about which exclusive prep school I had attended on my way to gracing the ivied halls of one of the best universities in the world. For my questioner, there were only a handful of correct answers; any other point of origin marked me as irrelevant in his universe.

A few days into my college experience and I was irrelevant.

Until that point, I thought I was defined by what I had done. Now I discovered there were a host of external markers defining me in the eyes of others. What town did I live in? What subdivision? What street was my house on?

Classic ways of differentiating people; all new to me. So much for being a valedictorian; I was profoundly ignorant of things that apparently mattered. I’m in a new place, a thousand miles from home, and feel profoundly out of place. Have I been out of place all along and only come to see that now?

I’d never thought about myself as a kid from the Midwest until I was among people to whom the middle class Midwest was a foreign land. It was disorienting. I had grown accustomed to being the smartest person in the room. Now, I was in rooms where everyone was as smart or smarter. And smart wasn’t the pertinent metric. There were entire realms of competition and measurement I couldn’t see even as I fell short.

Working out the implications of this has mostly involved time with various therapists. Not terribly interesting in this context. But coping with disorientation turns out to be a good way to prep for the future we live in now. Unpacking a question like “where did you prep?” turns you into an anthropologist in your own environment.

Pardon him, Theodotus: he is a barbarian, and thinks that the customs of his tribe and island are the laws of nature

I was a barbarian forced to recognize customs as simply that. This put me on a path to make sense out of institutions and organizations and the people inside them.

The past year has accelerated a long simmering trend toward shifting work from physical space to virtual. For teams and groups that have a working history to draw on this transition is mildly disruptive. For newly assembled teams, however, all the cues and clues that were readily available to work with in a physical encounter aren’t available in the virtual. If we want these virtual groups to succeed and flourish we now have to think about things that were just there in the background.

When you foreground these things they create different effects than in the background. Making an explicit point that you went to Princeton or Harvard is quite different than a diploma on the wall or a discrete reference/object on a shelf in the corner that might trigger a question or open up a conversational gambit. There’s no easy conversation opener about someone’s Starbucks order or lunch. No reference to some object of interest in the place where you are interacting.

One of the reasons we’re finding ourselves exhausted in this new virtual world is that we are now having to do the work that our places did for us.