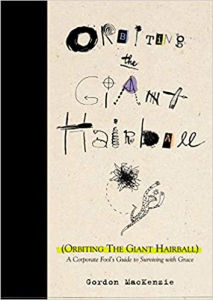 I first encountered Gordon MacKenzie’s Orbiting the Giant Hairball during my time growing Diamond Technology Partners. I decided to revisit it recently. I’ve picked it up from time to time over the intervening 23 years (we’ll return to that notion in a bit). It wasn’t something that neatly fit my typical reading patterns. But it deals with a problem that has been central to my work. How do you reconcile creativity and organizations?

Maybe it was the image of large organizations as “hairballs.” MacKenzie’s point about larger organizations was that they accrete rules and standard operating procedures over time. Mostly, that is a good and necessary thing. You don’t want every worker on the line to decide which tires to attach to the axles today. But if you spend much time inside organizations, you learn that rules and rule-making can impose their own perverse logic. How many items in the standard operating procedures or the employee manual reduce to “never, ever, let Joe do that again?” Organizations are suspicious of creativity and people are full of it. A volatile combination.

MacKenzie worked inside Hallmark; he was a creative leader in an organization that depended on its creativity. Even there, the forces working to suppress creativity were powerful. MacKenzie puts it succinctly, ” it is not the business of authority figures to validate genius, because genius threatens authority.” His solution as he gained authority within Hallmark was appropriately creative. Genius is hard to discern before the fact. MacKenzie’s answer was to default to saying “yes.” If someone or some team approached MacKenzie with a proposal to try something, he gave them permission. He didn’t ask or worry whether he had any authority to do so. This mildly subversive act was often just enough to shake loose resources or convince others to let an experiment proceed. I adopted this strategy to good effect.

Fundamentally, Orbiting the Giant Hairball is about this tension between order and chaos. The proponents of order are loud and powerful. But the world depends on the balance between yin and yang. There are more than enough forces working against creativity in organizations; the creative spirit needs champions too.

One final observation. I pointed out at the start that I had elected to reread this provocative little book, Lately, I’ve been encountering a lot of well-argued, and certainly well-intentioned, advice about the importance of improving efficiency in processing new information. We’re assaulted with new inputs. But efficiency is the wrong metric. Managing inputs effectively should dominate efficiency. But effectiveness is much harder to assess. Many items on my reading list are worth no more than a single reading; some turn out to not be worth that. But the other tail of the distribution also matters. Certain books yield new insights when you revisit them with further experience. Don’t let a quest for temporary efficiencies block access to that additional value.

One thought on “Choosing to say yes inside the organizational hairball”