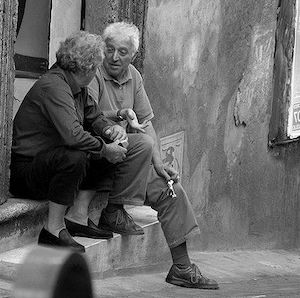 It took me a long time to realize that I wasn’t being heard because I wasn’t taking the stage. I confused doing well in classrooms with having something to say worth hearing. It didn’t occur to me that getting called on was a teacher’s decision, not mine.

As I began to work in the theater, I was content to stay in the wings. For that matter, the actors might have been visible and their lines reached the back of the house. But actors’s lines are someone else’s words.

Having something worth saying and discerning the moments when it can be shared in a way that it will be heard is a much more subtle evolution. One of the steps on that journey for me occurred while I was stage managing a small production in college.

Remember, “drama queen” is a pejorative rooted in the theater. The two leads in this show had not been well cast. Their chemistry was virtually non-existent. For reasons long lost, the director had a poor rapport with the leads and couldn’t fix the problem. While all the technical aspects of the production were humming along nicely, an opening night disaster was the most likely outcome.

The leads didn’t trust each other and they didn’t trust the director. But they did trust me. I spent an inordinate number of hours before and after rehearsals listening to each of the leads pour out their anxieties and fears. They had to give voice to their nightmares and that called for someone to hear them. That got added to my job description.

We did make it to opening night and we ended up with a decent production. For me it was a lesson in what “the show must go on” can entail. Mostly, I filed that lesson away with the other ones about real people in real settings that didn’t fit into my preferred reality of technical rationality.

Some seeds take longer than others to germinate. One particular benefit of working in the live theater is that all the moving parts are readily observable. What I slowly came to appreciate is how it takes all the parts working together to create results to celebrate. That, and the value of human ingenuity to tackle the unexpected when it inevitably happens.

In more complex settings, it can be tempting to just focus on your little piece. This is the technocratic impulse that wants to believe there can be a policy and a procedure for every contingency. If you can step back far enough to see the whole picture, then this technocratic impulse is revealed as the fantasy that it actually is.

The more complex the environment, the more important it is to remember and promote the role of human adaptability and ingenuity. The voices of those ingenious people are often distant from the corridors of power. It is always worth finding them and listening to their perspective and insight.