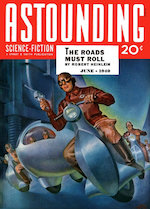 My mom’s been gone for almost sixteen years now. I still marvel at how she managed to wrangle seven kids between the ages of 8 and 1. I recall one conversation about reading when my boys were young. I was the absolutely stereotypical bookworm. Getting my first library card at the age of 10 still ranks among my signal memories. On a recent visit to my home town, I actually stopped at the local library simply to thank the librarians for existing.

From time to time, my dad would grumble about getting my nose out of whatever book it was buried in and go outside. Mom, on the other hand, never once complained or pushed me to do something else. When I asked her about my relationship with books and why she sided with me rather than my dad she said,

You were compelled to read. I didn’t know what was driving you but I could see that it was something you had to do. I decided it was more important to let you follow your own curiosity than try to tell you what you ought to be doing.

I was pretty indiscriminate in what I would pick up. Early on, one vein that I started to mine was science fiction. I tore through the “age appropriate” material quickly and moved on to the grown up science fiction shelves in the library.

Muggles generally don’t “get” science fiction. But there is a core premise that has immense relevance in the world we’ve all grown up to live in. It has little to do with whether some author “predicted” cell phones or waterbeds or the internet. What science fiction makes you think about is the interaction between the relentless advance of technology and the equally relentless commitment to the status quo of groups and organizations. People are gonna people whether they travel by covered wagon or starship.

What science fiction encourages you to do is to think about how people will react in any kind of scenario. And, it gives you permission to imagine a much richer variety of possible scenarios beyond what history or contemporary society serve up.

There was a period in the 1980s, or so, when scenario planning was a popular technique in strategy circles. Turns out I had been studying scenario planning at the feet of much more accomplished story tellers than the strategy types could bring to the fight.

Technology change does trigger organizational change but the process is as human and messy as any other human system. Because it is fundamentally human, story is an essential entry point and vantage point.

One thought on “Living the stories of astounding futures”