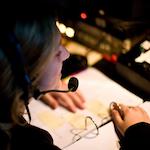 Developing an interest in the interplay between technology and organizations isn’t something you know is going to happen when you’re in middle school. There’s no teacher or coach to emulate. There’s no hero’s quest to set out on. But there have to be roots.

One of the constant elements in my life has been live theater. Books come from some magical place and appear on a shelf. TV shows and movies arrive from somewhere else, appear for a brief time on the screen, and disappear.

When the curtain opens on a play, there are real people before you on the stage. They wander off into some hidden place and reappear moments later. Perhaps you catch a glimpse of someone in the wings and wonder what they are up to. If you are a curious sort, you start to look for how to get back into those hidden places.

The conventional route is to aspire to be one of those people performing on the stage. Another path is to find work in the wings, to learn how the magic gets put together. Which was the path I chose. I started working in various backstage roles in high school and continued on in to college. I built and moved sets, I hung and focused lights, I searched out and managed the props  the actors used on stage. Much of this work took place while the performers rehearsed. During a performance, however, while the actors delivered their lines on the stage there was a crew in the wings making everything else happen on cue.

All of that activity was coordinated by one person with a three-ring binder in front of them and a headset covering one ear–the stage manager. The stage manager never seemed to actually do anything expect read the binder and talk with other people wearing headsets. But nothing happened until the stage manager gave the order.

Claire was the stage manager I apprenticed myself to to learn the craft. She taught me how all the pieces came together to create the magic that the audience experienced from their seats. How the technology that moved sets, illuminated actors, and amplified their lines was woven together in support of their performances and how all of that was focused on creating a specific emotional experience for the people sitting in the audience.

The magic depended foremost on the talent and craft of the performers. Done well, all the other elements of a production amplify the magic. Done poorly, any element can destroy it.

The seed that this planted was a hint of how the whole was greater than the sum of the parts. Watching magic from the audience was entertaining. Putting it together night after night was empowering and humbling.

Magic doesn’t happen. It gets designed and then it gets made. How can you not want to learn more?

One thought on “Looking for the machinery behind the magic”