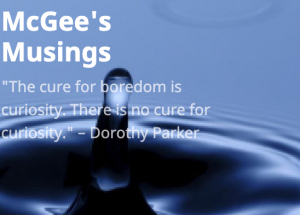 This experiment is now old enough to enlist. Pretty sure that wasn’t something I anticipated.

The blogging software I was using at the time asked for a tagline to describe the blog. I chose a quote from Dorothy Parker that I always liked and that seemed to fit the spirit of blogging at the time:

“The cure for boredom is curiosity. There is no cure for curiosity.” – Dorothy Parker

I found it an interesting bit of serendipity that the New York Times ran an op-ed on Sunday titled “Why Aren’t We Curious About the Things We Want to Be Curious About?.” The core argument is that:

Across evolutionary time, curious animals were more likely to survive because they learned about their environments; a forager that occasionally skipped a reliable feeding ground to explore might find an even better place to eat.…But it’s good to know about your environment even if it doesn’t promise a reward right now; knowledge may be useless today, but vital next week. Therefore, evolution has left us with a brain that can reward itself; satisfying curiosity feels pleasurable, so you explore the environment even when you don’t expect any concrete payoff.

The article offers insight into the mechanisms of curiosity, their payoffs, and a little bit of guidance about nudging curiosity into less frivolous paths.

It’s pretty clear to me that the environment we inhabit is increasingly in flux. Unsurprisingly, I’m in the school of thought that believes that curiosity about what is new and what is different is more relevant and important than ever. Hence, I continue to explore. I share traces of that exploring for two reasons. One, it forces me to make sense of what my curiosity dredges up. Two, it connects me to other explorers and their perspectives.