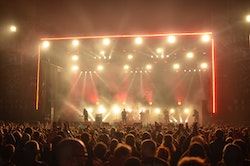 We had about two minutes left in the finale. Twenty five dancers filled the stage, the music director was in the pit with another twelve musicians, I was stage right talking to the lighting crew via a headset and the stage crew via hand signals. In about thirty seconds, I would give a “Warn Cue 104” followed by a Standby and a Go.

It was the final night of our ten-city tour and we were performing in a lovely theater at New Trier West High School in Winnetka, Illinois. There’s a story about the space I’ll save for another day. Steve, the only performer not yet on stage tapped me on the shoulder. I looked away from my cue book. Steve was in his costume dressed as the Statue of Liberty—another story for another time.

Ok. He’s about to make his entrance upstage center. I’m not sure why he’s interrupted me.

Until he turns around.

Steve is not actually wearing his costume. He’s taped it on so that it looks normal from the front. From behind he’s naked from head to toe.

I miss giving the warning for Cue 104, but do manage to get out the Standby and Go in time. I then warn the crew to keep their eyes on the next 90 seconds. We set up and execute the next half dozen lighting cues, the band continues to play, and Steve makes his entrance, which starts from upstage center and proceeds downstage to the edge of the orchestra pit. As Steve passes each row of dancers, that row misses a step and recovers.

The finale ends, the curtain falls, and cast and crew breaks into hysterics.

One of the payoffs of rehearsal and constant practice is the capacity to go with the flow. And to know when you can tweak the flow without interfering with the audience’s experience. It was the final number in our final performance. The steps were muscle memory at this point. Letting me know at the last moment was more of a gift to the crew than a needed warning.

Ordinary organizations don’t build this into their process. Learning and rehearsal time is limited to occasional training experiences or stolen moments of on-the-job training. The rare major systems rollout may get planned training and support time.