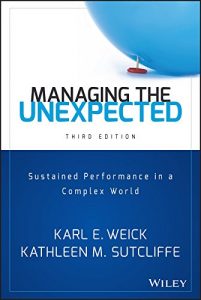 Conventional wisdom has it that the job of management is to “plan the work and work the plan.” Wall Street loves to see steady growth in reported earnings and managers learned to give Wall Street what they wanted. Sadly, the world is more complicated than Wall Street analysts would like to believe

Weick and Sutcliffe take an intriguing route in this book—now in its third edition. They ask what lessons might be found in the experiences and practices of high-reliability organizations. What’s an HRO? Flight-deck operations on an aircraft carrier. Nuclear power plant control room. Fire fighters. Cockpit operations on a 757. Common to all of these is a tension between routine operations and potential disaster. All face the problem of how to take ordinary, fallible, human beings and create organizations that work; organizations that operate reliably day-in and day-out, avoiding disasters for the most part, and coping effectively when they do.

While studying HROs is fascinating in its own right, Weick and Sutcliffe successfully connect lessons from HROs to the challenges of running more mundane organizations. The world is throwing more change and complexity at all of us. The problem is that most organizations, by design, are focused on the routine and the predictable. They effectively deny and eliminate the unexpected and the unpredictable, which works well in a stable environment. Less so in today’s world.

The core of the argument is that high-reliability organizations know how to operate mindfully as well as mindlessly (which is the default for most organizations). Mindfulness in this context breaks down into five characteristics focused toward two objectives.

The first objective is anticipating the unexpected. Three characteristics contribute to that:
1. preoccupation with failure,
2. reluctance to simplify interpretations, and
3. sensitivity to operations.

Each of these is a way to detect or amplify weak signals soon enough to do something useful. As Weick points out “unexpected” implies something that has already happened that wasn’t anticipated. You want to figure out that something relevant has happened as soon as possible. The problem is that stuff is always happening and we couldn’t get through an average day without ignoring most of it. The challenge is to differentiate between signal and noise.

One way of separating signal from noise is ignoring the routine. That’s why we call it routine. The trick is to avoid getting caught up with expanding the definition of routine so we can ignore more of it. Take a look back at the Challenger launch failure. Before the catastrophic failure, there had been a series of smaller failures of the O-rings. Each of these “failures” was explained away in the sense that the post-flight review processes concluded that the “minor” failures were actually evidence that the system was working as designed.

The issue is attitudinal. Most organizations, NASA included, treat earlier minor failures as “close calls” and ultimately interpret them as evidence of success. An HRO takes the same data but treats it as a “near miss.” Then the analysis focuses on how to avoid even a near miss the next time round. Small failures (weak signals) are sought out and treated as opportunities to learn instead of anomalies to be explained away.

Resilience is the term of choice for Weick and Sutcliffe because it highlights key aspects of organizations that typically are denied or glossed over. It acknowledges the human fallibility is unavoidable, that error is pervasive, and reminds us that the unexpected has already happened. A strategy of resilience focuses on accepting that some small error has already occurred and on working to contain the consequences of that error while they are still small and manageable. To be resilient requires an organization to be serious about such practices as not shooting messengers.

Weick and Sutcliffe cite one example from carrier operations where operations were shutdown when a junior member of the crew reported a missing tool. Instead of punishing this person for losing the tool, the captain rewarded them even though operations were suspended while the missing tool was found. Dealing with the small problem was rewarded because everyone recognized the greater risk of ignoring it. The same issues exist in all organizations, although the responses are generally quite different. The result, of course, is that problems are ignored until they are too big both to ignore and, typically, to deal with.

The second dimension to containing problems while they are small and tractable is knowing how to defer to expertise. Expertise can correlate with experience (as long as the experience is relevant). It does not generally correlate with hierarchical rank. Successfully seeking out and benefitting from expertise takes two things. Those up the chain of command must be ready to set examples. Those on the lines need to be assertive about the expertise they have to offer, which includes developing a clearer sense for the expertise that they have.

While the world that Weick and Sutcliffe describe is quite different than the organizations we are accustomed to, it does not require wholesale organizational change programs to get there. The mindfulness that they describe–of anticipating and containing the unexpected–can be practiced at both the individual and small group level. If their analyses and recommendations are sound (they are), then those who practice this mindfulness will gradually take over on the basis of improved performance.