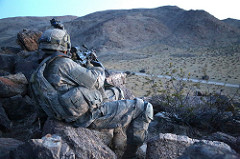 We are imitative creatures. We are happier copying someone else’s approach than inventing solutions based on the actual problem at hand. How often do you encounter situations where change is called for and the first response to any suggestion is “where has this been done before?” For all the talk of innovation, I often wonder how anything new ever happens.

Leaders and change agents have been fond of looking to the military for design ideas to emulate in their organizations. One all too persistent model was best captured by novelist Herman Wouk;

The Navy is a master plan designed by geniuses for execution by idiots. If you are not an idiot, but find yourself in the Navy, you can only operate well by pretending to be one. All the shortcuts and economies and common-sense changes that your native intelligence suggests to you are mistakes. Learn to quash them. Constantly ask yourself, “How would I do this if I were a fool?” Throttle down your mind to a crawl. Then you will never go wrong.

This is a compelling image and in 1951 it likely represented a pretty accurate description of the Navy. Too many organizational leaders operate as if it were still 1951 and that military was an exemplar of good organizational practice. If you also believe that the military organize to fight the last war, what war are organizations fighting when they copy their designs from that military?

If we insist on copying ideas, perhaps we should at least update our mental models. If you want to draw lessons from the military, do it intelligently. If you look in the right places, the modern military has been more innovative about organization and leadership than other institutions because their consequences can mean the difference between life and death – something just a bit more compelling than making your quarterly budgets.

While business organizations remain fond of command and control, the military has had to cope with the disconnects between the view from headquarters and ground truth. Regardless of what TV and the movies suggest, orders do not flow from the Situation Room to the troops on the ground. Commanders spend their time articulating “commander’s intent,” not on developing detailed orders; they worry about making sure that all concerned understand “why” and what finished looks like first.

If the job at the top is to articulate why, what does that enable at the front lines? It grants those with first hand knowledge of the situation the freedom to exercise initiative and adapt action to the circumstances. It also eliminates “I was just following orders” as an excuse for failure.

This model places much greater responsibilities on the front lines, so you had better staff those lines accordingly. Perhaps put a better way, you must trust that they are capable of what they may be called on to do. Wouk was reminding us that those on the line only behave like idiots if you treat them so.

If you make the transition to starting from commander’s intent and trusting that you’ve put capable people in place, then orders become much simpler to devise. In the volatile world that constitutes today’s environment for most of us, you can offer a default set of orders to cover the unexpected; keep moving, stay in touch, head for higher ground.